Time to turn up the volume!  And still use our color scheme!  I had a card I entered in a challenge that was so-so.  It was based on a card sketch (source unknown). 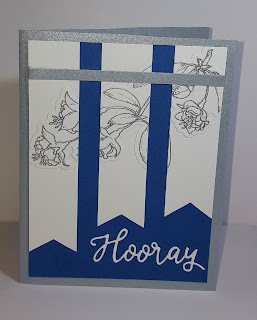 The card was OK - I did win a happy for it!  The sentiment on the front is from an unknown source - the inside says "Let's Celebrate!  It's Your Birthday!"  The stamp is from Technique Tuesday as well as the die cut to cut out the flower.  I cut it into thirds to mirror the sketch.

To Wow the card I removed the silver glimmer card stock strip and added glitter Washi tape.  I also added several rhinestones.  The card worked very well because I already had the colors needed. 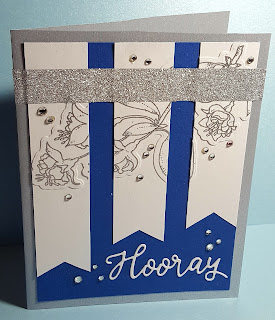 I even added rhinestones to the sentiment inside.  It is harder than it looks to try to change a card after you have finished it! ~ Gracie