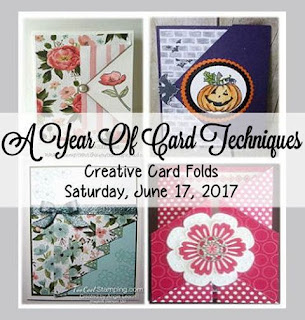 Welcome to A Year of Card Techniques Blog Hop where each month we feature a different card technique.  We’ve assembled a team of card makers who range from new to advanced, so you’ll see a great variety of cards and ideas.
June‘s hop is devoted to basic card folds; featuring drapery/curtain fold, peek-a-boo fold or double-z gate-fold.  And we’re adding a twist of using double-sided paper.   We hope this gives you lots of ideas and will inspire you to try these card folds yourself...and pull out that double-sided paper as well!    If you would like to check out our past technique hops, you can do that here:
We have an amazing sponsor this month, Candy Spiegel.
Please take a moment to check out all the crafty goodness on her blog, Candy Scraps.
And the awesome prize this month is: 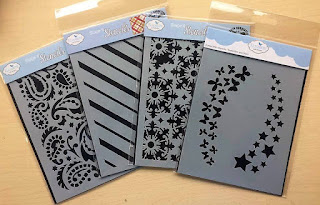 We  really appreciate feedback, so please leave a comment on each of the blogs in the hop today.  While you are encouraged to comment at any time, only comments received by  Friday, June 23, 2017 at 8:00pm (EST) will be eligible to win.   The winner will be announced on Sunday,  June 25, 2017 on A Piece of (my) Heart’s blog, so be sure to check her blog on Sunday.
And speaking of winners, the lucky hopper from last month is SUSAN ELIOT; picked by Random Name Picker.  Congratulations, Susan!  Please get in touch with last month’s sponsor, Jodie Park, to claim your prize.
You should  have arrived here from Amanda. If you're visiting  here first, you might want to start at the beginning so you don't miss a thing and increase your chances of winning by commenting on  each blog.
Four of our team members participated in this hop.

First up is Gracie who did all three folds for some awesome cards. 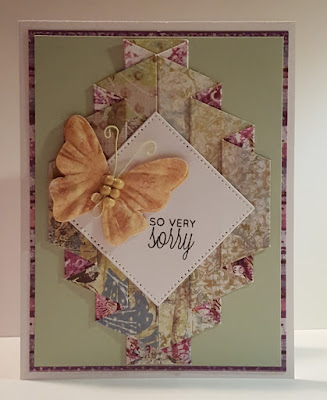 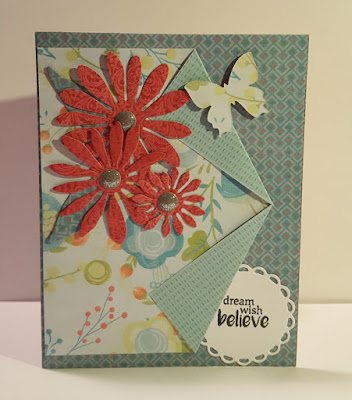 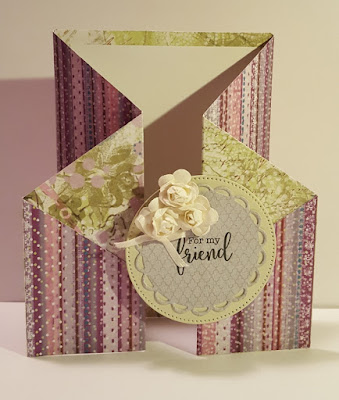 I love fancy folds so I chose to do all three :)
The first card is a drapery fold card.  I started with a white cardstock base. I used KC&CO double sided paper.  The paper was cut and scored then fan folded so each side is seen.  I die cut a stitched square and embossed the sentiment (from Technique Tuesday) and attached it and the butterfly (an old old one from my stash).  I mounted it on celery cardstock and on the reverse side of the paper.
The second card was made using double sided paper from CTMH.  It is a peek a boo card.  The corners were folded back on the panel to show the other side of the paper and the sentiment peeking out (from Raisin Boat stamped and embossed on a die cut scalloped circle.)  I die cut the butterfly from the front side if the paper and mounted everything on a panel of coordinating paper.  I die cut flowers and added enamel dots to the center.
The third card is my favorite. It was also the most confusing for me as I have trouble with numbers (seriously).  I used double sided cardstock from KC&CO.  After measuring and cutting twice lol I folded and burnished the folds.  I added a center panel.  The sentiment (from Technique Tuesday) was stamped on a diecut scallop and placed on a diecut stitched circle.  I added 3 roses from Recollections and ribbon. ~ Gracie

Now we have Denise with two different kinds. 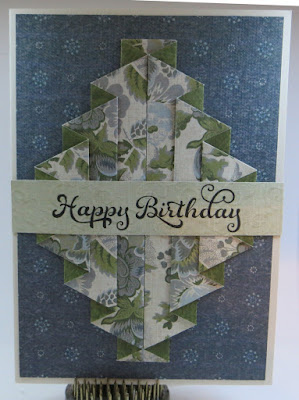 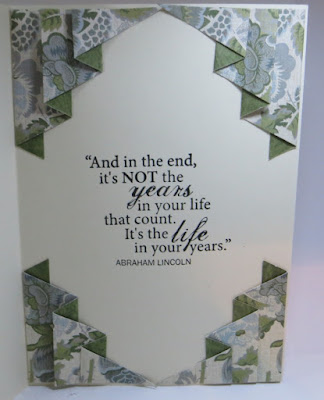 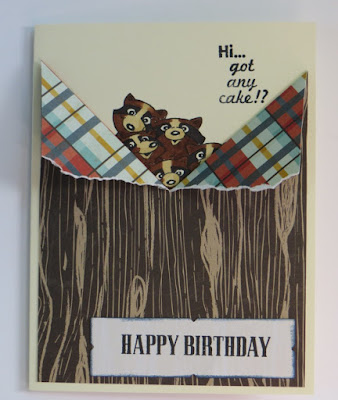 I have had the drapery fold pinned on my Pinterest board forever, but didn't make one until now. The first card is made with paper from K & Company called Julianne.  I used a different coordinated pattern for the background and the banner across the middle. The front sentiment is from Hampton Arts called Chalkboard.  After I had scored the paper and cut off the corners, I thought there should be some way to use them, so I added them to the inside to frame the sentiment. It is by Fiskars and is called Birthday Greetings. I will do that again so that I don't feel like I am wasting paper.

The second card was a fun one. It uses paper from a 6 x6 pad by My Mind's Eye called Happy Camper.  I cut the patterned paper down the center and held it on the card base to made a mark where I could stamp the raccoons from Art Impressions (Any Cake set). I stamped them and colored them with my Spectrum Noir markers. Stamped the sentiment above.  I tore the cut edges where the fold would be to make it look a little more like the raccoons were ripping their way through (not fun if it is real raccoons) and left the flaps free when I glued down the rest of the paper.  I added the sentiment on the bottom since there was so much space. - Denise

Tantalaya is up next with three great versions of the drapery fold. 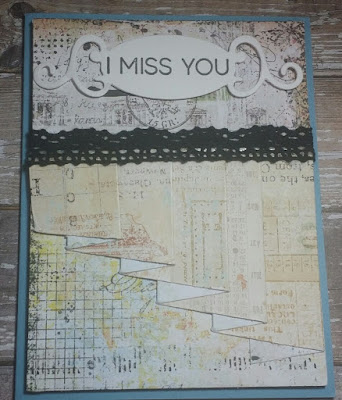 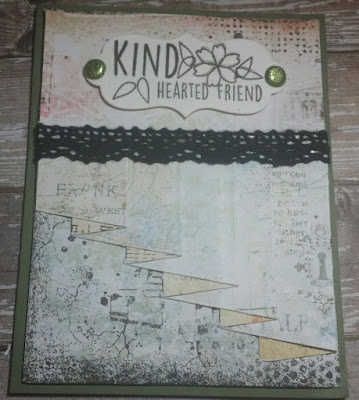 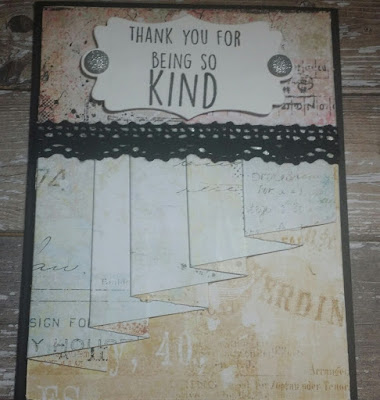 I used the paper collection Happy Accidents from blue fern. Black lace from my stash but it was adhesive backed and I loved how it finished off the card. I then took label dies and punched them out for the sentiments. On 2 of the sentiments I used the glitter brads that matched the best a silver set and the green to match that card base. – Tantalaya

And we wrap up with two wonderful cards from Sue. 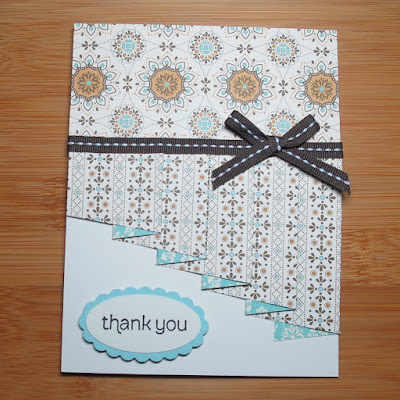 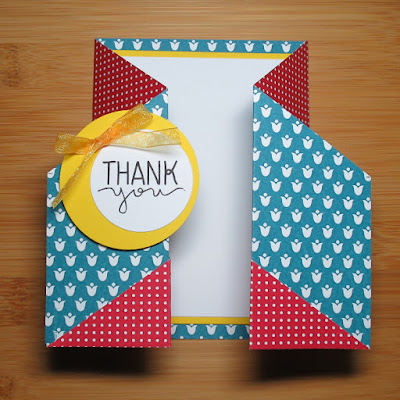 Double Z fold -I started a piece of double sided paper from Stampin’ Up’s Summer Smooches Designer Series Paper, cut to 5.5” x 12”. Be sure to check which way you cut the paper, especially if there is a design which must go in a certain direction – for instance, the tulips of my card. Make score lines at 2”, 4”, 8” and 10”. Mark on each edge at 2.75”. Fold the cards at the 4” and 8” score lines and mark at the top of each of the 4” and 8” score lines. Trim the paper, joining the marks on each side. Save the triangle pieces – the piece from the top right, is flipped and adhered on the bottom left of the card and visa versa. It was easiest to adhere the “wider” side of the triangle, fold over the score line and then, adhere the small point of the triangle. Repeat on the other side. I felt that the card had bold colours and needed a bit more of a punch of colour. I chose bright yellow to mat the inside panel and to mat the sentiment circle.  The sentiment is from Simon Says STAMP’s Lots of Thanks stamp set. I added a small bow to complete the card. - Sue

Now  you’re off to visit with Lisa. Hope you had fun and thanks for stopping by.  See you next month with another technique!
The Card A Day Challenge Team.
Here’s the full line-up in case you get lost: