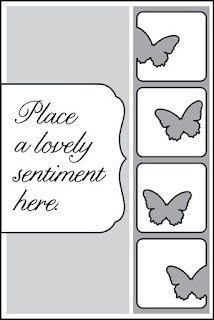 Gracie liked it so much, she did two different cards. 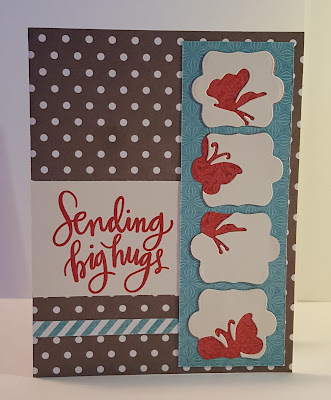 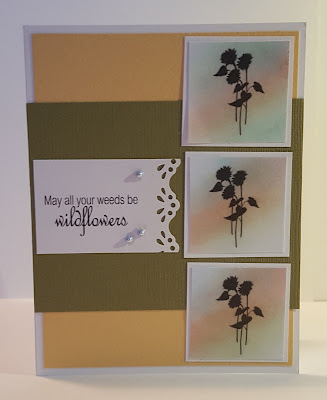 Today I chose to make 2 cards - one following the sketch and one slightly changed.  The first card was made using die cuts for the butterflies and the rectangles.  I cut the rectangles twice then cut the butterflies off center on each.  I mounted them on CTMH paper and on polka dot Darice cardstock as a base.  The sentiment is from "Big Scripty Sayings".
The second card was made using digital images purchased from Beccy Muir.  I used Distress inks on the flowers and cut them out into squares and mounted them on white cardstock squares.  The sentiment is also from Beccy Muir.  I trimmed the edge using a Fiskars punch and added 3 light blue flat back pearls.  I used olive and yellow Bazzil cardstock for the panel and a white cardstock card base. ~ Gracie

My card is yet another look. 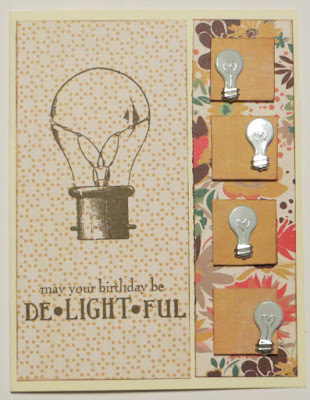 I have been wanting to use some decorative brads that I just purchased, so this card was a good chance to do that.  I matched it with a couple of stamps from the Kit of the Month set by Unity Stamp Company called Everyday Fairy Tale. The papers are from a 6 x 6 pad by Basic Grey called Herbs & Honey. (I am telling you that I have a serious addiction to 6 x 6 pads)  The brads are from Eyelet Outlet and I used the sketch idea to position them differently in each of the squares. - Denise